ReturnOnTime’s views on 9/29/2020:  The market remains in a small correction though has shown some signs of recovery. While many parts of the market remain significantly overvalued, there is a number of strong stocks to invest in that are still significantly down since the pandemic started. Now more than ever before, investing requires building a highly diversified portfolio that can capture returns across asset classes, industries, AND various countries for the best possible outcome.

Check out some 2020 investing insights in these articles:

When Will The Stock Market Crash?
The 60/40 Portfolio Is Dead

Value vs Growth Stocks in 2020

WAIT – What the heck does any of this mean? We’ve got you covered.

The P/E10 ratio, also known as the CAPE or cyclically adjusted price to earnings ratio, represents the price to average earnings from the past 10 years. It is less prone to wild swings since it does not reflect just one year of results like the typical P/E ratio.

The CAPE ratio has proved useful in identifying points in history where stocks, in general, have been overvalued or in bubble territory. The CAPE ratio has hit record-high levels at 3 important times in the past: 1929 at the beginning of the Great Depression, the late 1990s right before the huge DotCom Crash, and 2020 presently is the second highest CAPE Ratio in history. In our opinion, the CAPE ratio is a strong indicator of performance over the next 10 years rather than an indicator of how stocks will perform in the short term. In the short term, stocks may continue to remain or grow even more overvalued.

Market capitalization is basically the total monetary value of a company, or index. For example, Apple, as one company has a market cap of $1.93T. Put another way, Apple is worth $1.93T in the stock market.

The Wilshire 5000 is the market value of ALL US stocks actively traded in the United States. This differs from the S&P500 which only measures 500 stocks in the US.

Gross domestic product (GDP) measures the total value of good produced and services provided in a country. Usually, this is measured over a period of time like a quarter or a year.

The Market Cap/GDP ratio, also known as the Buffet indicator, is the Wilshire 5000 total market cap divided by US GDP. Depending on this ratio, there is a consensus on the expected returns from investing over the next decade.

GuruFocus has divided market valuation into 5 zones:
Here is where we are as of August 10th, 2020: 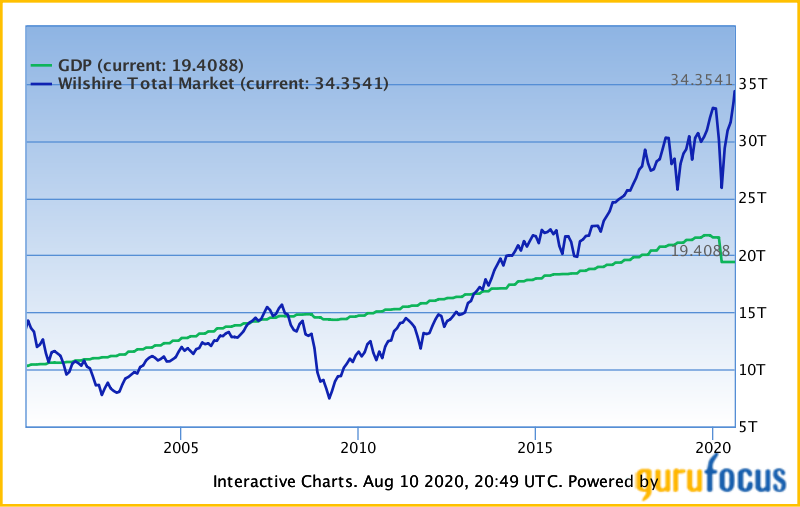 Equity risk premiums refers to the excess return that investing in the stock market provides over a risk-free rate. Treasuries are considered risk free investments since they are backed by the US government, thus this is usually the difference between the expected returns on a diversified basket of stocks (like the S&P500) minus the expected return on risk-free 10 Year Treasury bonds. The equity risk premium can be measured differently investor to investor.

Given that the Federal Reserve has cut interest rates to 0% again, the 10 year Treasury is currently yielding 0.58%.

For the purposes of our definition, we will refer to the cyclically adjusted earnings yield of the S&P500 and subtract the 10 year treasury yield from that.

So, what does this really mean? When the 3 month yield exceeds the 10 month yield for at least a quarter, it’s typically an early indicator of an economic slowdown and impending recession. This indicator is 18 months early on average and has predicted every recession since the 1950s, including the current 2020 recession.

During a recession, we typically see the yield curve turn positive again as the Federal Reserve cuts interest rates to stimulate the economy out of the recession. Generally a positive yield curve implies economic expansion or growth.

Sign Up For Our Weekly Email That Helps You Get Financially Smarter in 10 Minutes A Week!